The Great Walk of Africa, Kenya 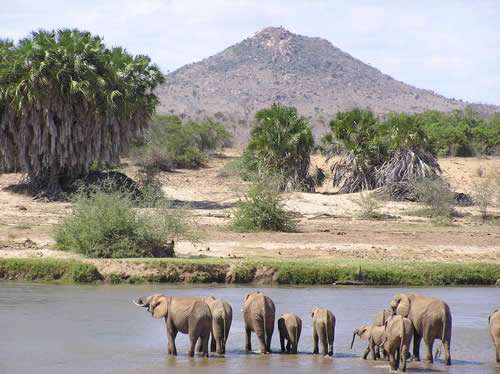 Following game trails you will make a 12 day crossing of the immense wilderness of Tsavo, Kenya, in a true explorer’s style safari. The route will take you along the courses of both the Tsavo and Galana Rivers, moving camp every day, and experiencing Africa’s unique wildlife and birdlife. Tsavo is big game country: elephant, Cape buffalo, hippo, lion and leopard. 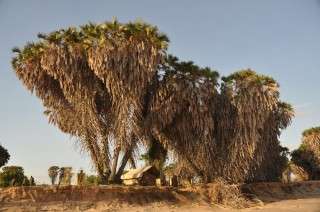 The camps are stylish, food while on safari is gourmet and camp staff have 25 years safari experience behind them.

Vehicles move the camp and personal belongings every day, and your days on Tsavo’s rivers will be gloriously full: Walking the mornings; resting away the afternoons; game-driving the last hours of daylight in specially designed 4×4 safari vehicles.

This is truly one of Africa’s finest adventures.

You will be met at Jomo Kenyatta International Airport in Nairobi and transferred to a select hotel in the suburb of Karen. The remainder of the day can be spent at your leisure, though an evening briefing with your Tropical Ice guide is scheduled at the hotel, here you will also meet the other walk participants.

An early morning one hour flight will transfer all walk participants into Tsavo West National Park. The safari vehicles will be ready to transfer the group to the first camp, which is reached in the late afternoon. Overnight Mzima Springs Camp. 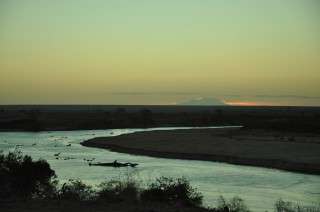 You arise with first light, and after breakfast the foot safari begins across the vast 8,300 square mile wilderness that is Tsavo. The route closely follows the Tsavo River, flanked by rich riverine vegetation, as we walk along hippo trails winding their way through thickets of fig and tamarind trees, doum and raffia palms.

The craggy, sharp-rising Ngulia Mountains offer a dramatic backdrop to this section of the river, as the early morning produces a fascinating play of light across the range, when the clouds lift to present the orange – coloured rocky peaks. This part of the Tsavo River will produce many hippo sightings, as well as plains game such as Lesser kudu, gerenuk, and Maasai giraffe.

The walk today will cover a distance of 16 kms, and you will arrive at the next camp in time for a large lunch. Like all the camps, this one is situated on the banks of the Tsavo River, below the highest peak of the Ngulia range. The afternoon is set aside for siesta. Overnight Kudu Camp.

They say that in order to experience the wonders of the African bush, it is essential one does precisely as the animals do – our daily routine therefore emulates the schedule of the wildlife. Up at first light, eat a fresh breakfast, and head out along the path. 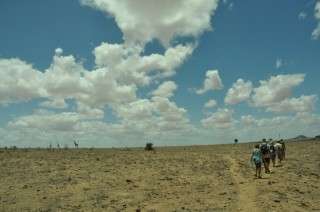 Today the foot safari will make its way along a 19 km course, following game trails along the Tsavo River, as it winds across the country below Ngulia Mountain. We are now entering a region reknowned for its elephant populations, and you will be amazed at how close you can safely approach this great animal. As the morning moves along, our route leads us to a point beneath the spectacular Kichwa Tembo (elephant’s head) peak. This dramatic 3,000 foot spire soars above the banks of the Tsavo River, and it is appropriately known to the Taita people as the “guardian of the plains”.

You reach camp in time for lunch, followed by a well-earned siesta (the animals insist on this too).

This region of Tsavo West was the location of intense fighting during the First World War. Tanzania was then known as German East Africa, while Kenya was British East Africa. The Tsavo River was of vital logistical importance during the battle for Kilimanjaro – it offered, for the British, a well-watered direct route to the mountain, while the Germans were well aware of it’s comparative easy access to the British railway, linking the Kenyan coast (Mombasa) to the interior (Nairobi). This railway was blown up several times. As a result of this the Tsavo River region was heavily fortified, and today many indications of the First World War still exist.

In the late afternoon you will visit a nearby well-preserved British fort. Overnight Kichwa Tembo Camp.

A 16 km walk distances us from the peaks of Ngulia and Kichwa Tembo, as we enter drier country leading to Maji Ya Chumvi (salt water). As with every day on our foot safari, wildlife is continually encountered. Impala, Grant’s gazelle, zebra and giraffe are frequently seen. Tsavo is the largest elephant ecosystem in the world, and the Tsavo River is a vital destination for them.

After lunch and siesta, you will have an optional game-drive down the river, and for those willing, climb
Kinyiki Hill for a spectacular overview of the endless Tsavo wilderness. Overnight Maji Ya Chumvi Camp. 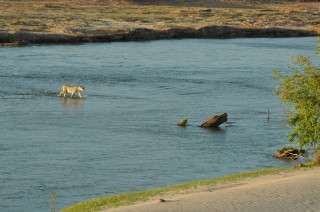 Today the Tsavo River leads you into the area of the famous “Maneaters Of Tsavo”. The morning walk of about 11 kms takes us to the region where in 1896 two lions ruthlessly (and, somehow inspiringly), halted the advance of the British Empire literally in its tracks. During a three month period, while the British were building the railway bridge across the Tsavo River, using imported labourers from India, these lions ate over 130 men. They were eventually, after exhaustive effort, killed by Col. John Paterson. Again you reach camp in time for lunch, and after a short siesta (today we trounce the wildlife), you continue the foot safari in the late afternoon for a further 4 miles to Tsavo Bridge, which still proudly stands in pristine condition. You are met here by the vehicles and driven back to camp.

Interestingly enough this region today sports a large lion population, and we often see them as they take advantage of the shade offered by doum palms on the banks of the river, and hear them at night from camp. Overnight Maneaters Camp.

You will drive the short distance to Tsavo Bridge, and continue our walk down the river. Today you enter Tsavo East National Park (owing to the immensity of Tsavo, for administrative purposes, it has been divided into two separate regions: Tsavo West National Park and Tsavo East National Park. At this point the Tsavo River makes its way down towards the confluence of the Athi River, beneath the prominent Yatta Plateau, where it forms the Galana River at a place called Tabagunji.

The walk today is about 13 kms, across country dominated by many rock kopje’s (outcrops). You reach the waiting vehicles in the late morning, and drive to the next camp at Lugards Falls. After lunch and siesta, you can game drive down the Galana River. Overnight Lugards Falls Camp.

The safari has now entered a different ecosystem. The dense undergrowth of Tsavo West has now given way to semi-desert country, bordered to the north by the Yatta Plateau (the longest lava flow on earth – 260 miles in length). 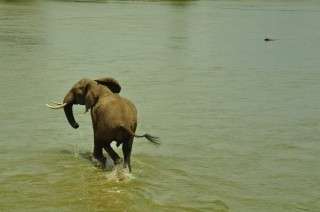 In this country, because of its openness, game is easier to see and there is a lot of it. The Galana River is about 100 yards wide, and is characterised by wide sandy beaches, and palm trees. It sports one of the largest lion populations in East Africa, as well as a wealth of plains game (including the very rare Peter’s gazelle). Big herds of zebra, hartebeest, impala and Fringe-eared oryx are frequently seen along the Galana River. This is also the region of Tsavo’s biggest elephant populations.

The walk today is about 16kms and takes us to a camp, which is located at the point of the Yatta Plateau.

You are now in one of the most remote wilderness areas of East Africa, in a world of stunning beauty. To see a herd of elephants, silently loping across the sand to the rivers edge, then wading through the blue water to the distant shore, is a sight which can’t be improved. At this point of the safari, one can easily, and naturally, feel as much a part of the wilderness as the wildlife you are seeing. Without doubt your senses have awakened to a state where you can instinctively hear, see, and feel things, that no amount of concentration at the beginning of our walk could ever have produced.

After todays 19 km walk, we return to camp for lunch and a well-earned rest. As is the norm, you will game- drive along the river late in the day. Overnight Epiya Chapeyu Camp.

There are many unanswered questions about the lions of Tsavo. Why are most of the male lions maneless? Why do the male lions seem to do most of the hunting (this is usually the role of the female)? Why do these Galana River lions display more aggression than lions in other parts of Africa (remember the Maneaters of Tsavo – they were two maneless male lions)? 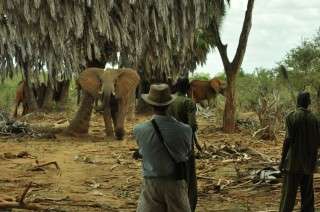 As the foot safari continues down the Galana River to Miritina, it is highly likely we’ll be able to make contact with some of these lions.

Lunch is at the semi-permanent camp at Durusirkale, followed by late afternoon game drives.

For the remainder of our foot safari you will be based out of this beautiful camp, as you walk the final sections of the river. The late afternoons will offer us the opportunity for game drives, when the river sparkles in the rich golden light and wildlife can be seen at its best. 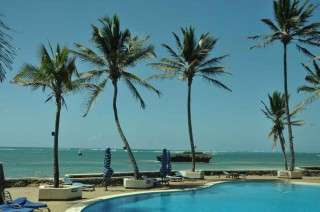 Today you walk the final miles to Sala Gate, on the eastern boundary of Tsavo East National Park. You will have a picnic lunch, and make the three-hour drive to the Indian Ocean, arriving at the beautiful Hemingways Hotel in the late afternoon. Overnight Hemingways Hotel.

Spend the morning relaxing at Hemingways, then board the aircraft for the one-hour afternoon flight to Nairobi. You will then be transferred to the Nairobi airport for your departure flights.

*Mikes note; we can also arrange a shorter 6 night/7 day walk along the Galana River, which works well if you would like to combine a walk with a safari in the Masai Mara. We need a minimum of 4 people to run a private shorter walk. 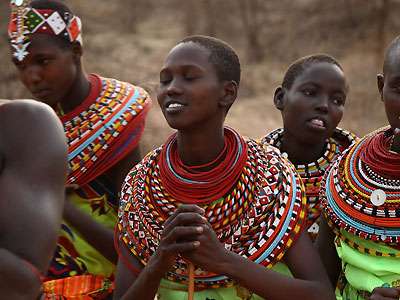 Warriors for a Week, Kenya 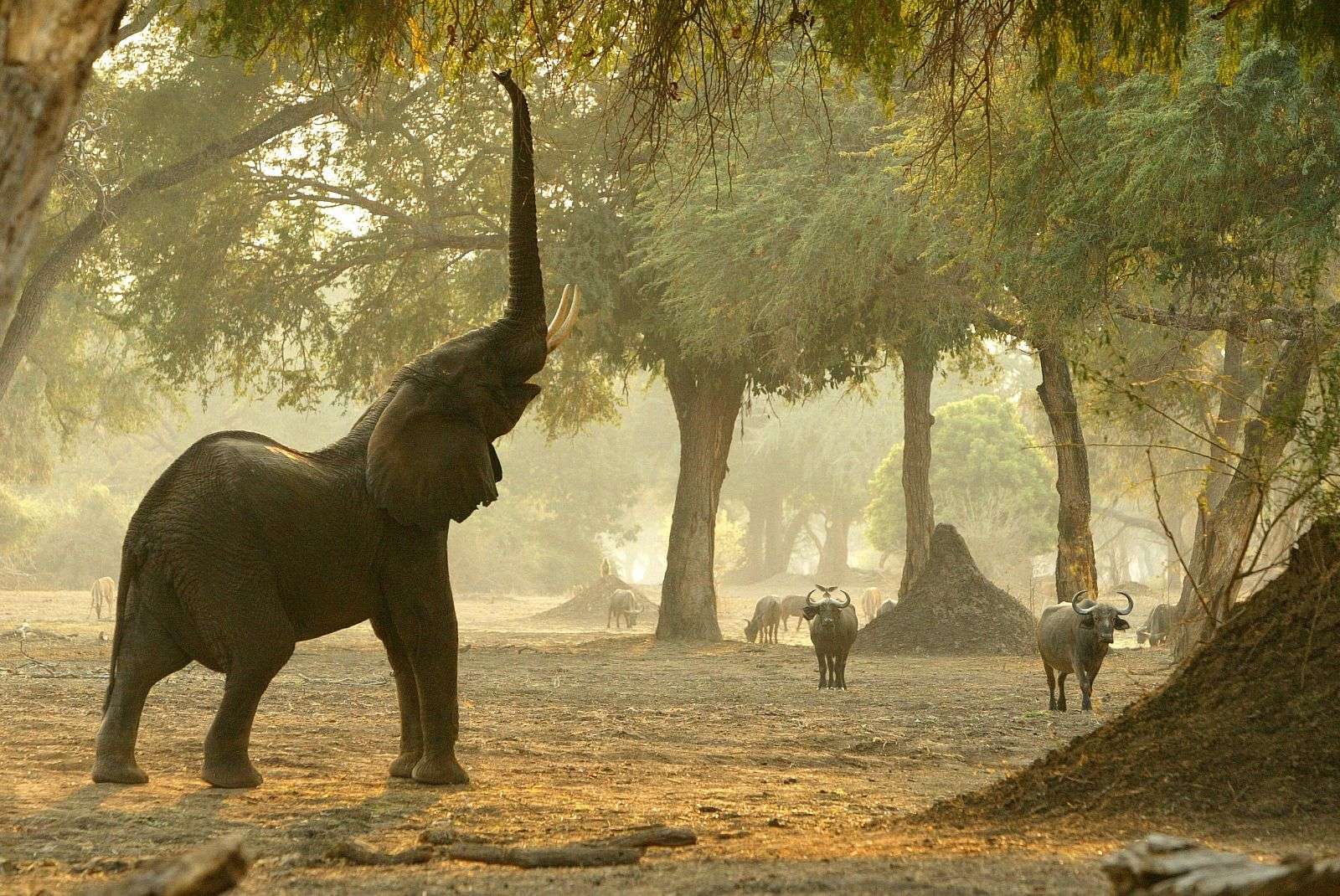