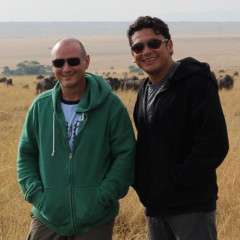 Chris and Ruben first travelled to Africa with Safari and Co in 2009and they vowed to return for Chris’s 50th. “We decided the trip would be 5-weeks, 1-week per decade,” he says.  Planning started in November 2012.  They wanted to see the wildebeest migration on the Masai Mara, the chimps in Tanzania, elephants and lions in Botswana,  wineries in South Africa…and spend some time at the beach.

“It was probably a bit challenging for Mike to organise all that,” acknowledges Chris.  But Safari and Co set the itinerary, arranged the details, selected the best camps and on the 10th of August 2013 Chris and Ruben departed Toronto for a once-in-a-lifetime safari.  They invite you to share some of their favourite pictures and stories and imagine yourself sipping a sundowner in the wilds of Africa. 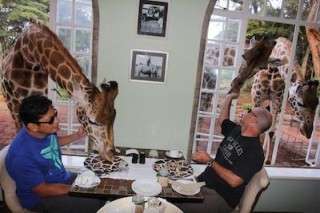 We’d been to Africa before, so we knew not to be afraid of the wildlife.  But we hadn’t felt particularly safe in Nairobi.  But if you’re going on safari in East Africa you pretty much have to stay at least one night in Nairobi.  So Mike suggested Emakoko Lodge and Giraffe Manor.  It was like we started our safari early. At Emakoko we saw our first pride of lions and a family of three rhinos. At Giraffe Manor we literally fed the giraffes at our bedroom window. It was like being in a fairy tale.  On this trip Nairobi was actually one of our highlights. 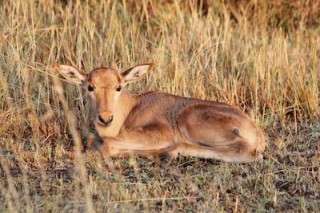 We were out one morning at 5am following this pride of lions.  The male lion was very hungry and a baby Taupi had lost its mother.  We had hoped to see a lion kill….but this was a baby!  We were on pins and needles wondering if we were going to watch this poor little thing be devoured.  But it turns out that the baby had not yet developed a scent, so the lion completely missed him…walked right by! 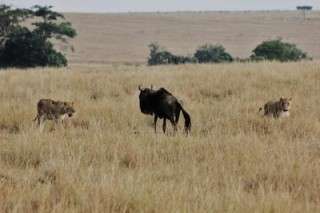 Our guide, Edwin, had overhead Ruben say we’d really like to see a kill.  He told us to be patient.  “That lion is really hungry.  As the wildebeest move closer and closer, the lions will pick one off.”  So we went back in the afternoon and waited.  Of course it was luxury waiting, eating mixed nuts and sipping white wine.

All of a sudden Edwin said, “It’s going to happen.”  We packed up and raced over in the jeep and, sure enough, three lions had picked off this wildebeest.  It was difficult to watch but exhilarating at the same time.  We were just so close. 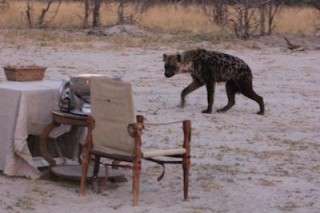 It was around 6:30 or 7pm.  The camp managers had set up these huge sofas, a bar and big screen in the middle of nowhere and we were going to watch a movie.  They were cooking up popcorn and we were just having a drink when we saw these 2 hyenas coming right in to us.  The staff said, “Don’t worry.  Just relax.”  In the end we sat there with those hyenas right behind us watching the movie.  That was surreal. 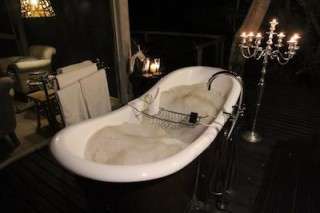 I teach customer service, so I’ve studied the Disney model.  Abu and Mombo Camps are both Disney quality for sure.  The service was just so detailed.  Everyone knew our names, and what we had done each day.  They knew the white wine we liked and kept the cooler in our room stocked.  There was a big proper bathtub on the deck at Abu.  So when the staff found out that I liked to take baths in the Canadian winters, they poured a special birthday bath.  The tub was under the stars with candles and champagne.  They were amazing! 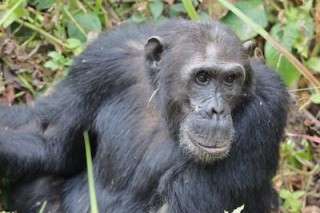 I was looking out the window of our banda and I said, “That looks like a chimp!”  Ruben said, “Oh I don’t think they’d be that close.” Then he looked out another window and there was a huge chimp staring right at him.  Some people hike for 8 hours and never see the chimpanzees up close, and here they were….right in camp.  We were lucky that day.  But maybe not so lucky, because Mike knew what time of year we should come for the best experience.

The next day we had an exhilarating 3-hour trek to see even more chimps. 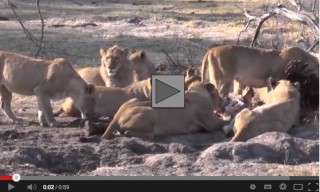 We had been on safari for many days and had seen pretty much everything.  It was our last safari and we were debating whether or not to go.  But we said, “Let’s go. You don’t know what we might meet.” Everyone was looking for white rhinos.  The other two cars went one way and we went the other.  About 45 minutes later the guide said, “Oh my god!”  We cut through the brush and there were 14 lions, 10 hyenas and 1 jackal eating a giraffe carcass, with the vultures sitting in the trees nearby.  The behaviour was incredible.  The hyenas were laughing and challenging each other, trying to steal the leg and then the head.  The jackal was running around looking for scraps and all the while the vultures were waiting.  Now we tell anyone going to Africa that they have to go out every time because you just don’t know what you’ll meet! 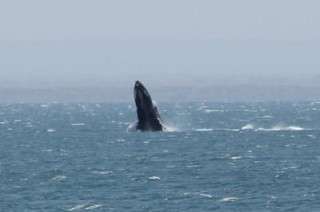 We stayed on a private island in Mozambique, which sounds pretentious but it was affordable and worth it!  We were in our villa by the beach, having a drink and debating whether to go whale watching in Mozambique or wait and go in Cape Town.  So I said, “Let’s just relax here at the beach and save the whale watching for later.”  And just as I was saying that, humpback whales started breaching right in front of our room.  Spectacular!

We love our wine.  We already knew that the food and wine would be spectacular at any camp that Mike picked.  But the vineyards surprised us. We have traveled to a lot of wineries.  The vineyards near Cape Town are just, if not more, beautiful than the ones in Europe or California.  It was just a lovely way to end our trip.

The thing Mike does is he creates an amazing journey.  He listens to what you want to do and then he puts it together.  He had his work cut out for him with everything that we wanted to do.  But with Mike you know you’re in good hands.  He took our list and he created the most incredible itinerary and it was executed flawlessly.

We invite you to share your best safari stories with us.  Never been to Africa?  Talk to us about arranging your own trip of a lifetime.