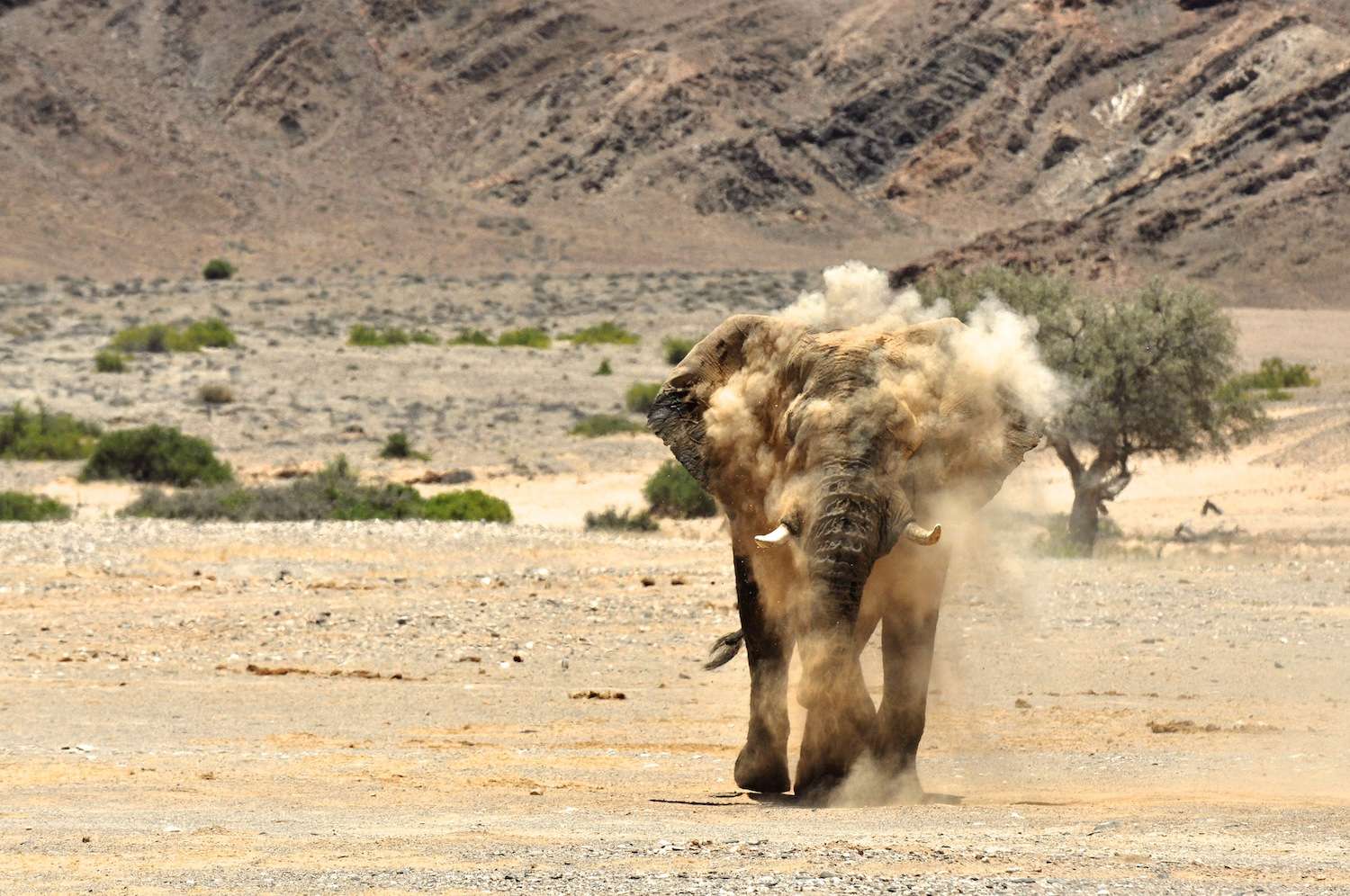 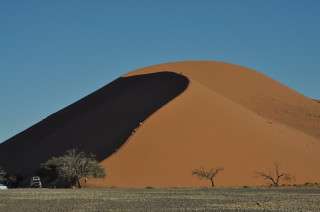 Climbing the dunes at Sossusvlei

There’s a buzz developing around Namibia. Magazines and travel programs feature Namibia more often and I’m getting far more enquiries about trips to this once overlooked part of Africa.

In November I set out to rediscover Namibia: to explore the landscape, wildlife and accommodation so I could better advise my clients. And so Adventurlogers…here is my advice: END_OF_DOCUMENT_TOKEN_TO_BE_REPLACED 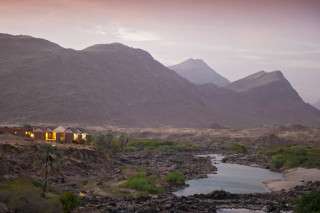 The Okahirongo River Camp is set in the far northwestern reaches of Namibia, near the Angolan border. Rough roads and lack of facilities have kept travelers away from the remote wilderness of the Marienfluxx region, so those who venture here discover a solitude and privacy lost to the rest of the world. 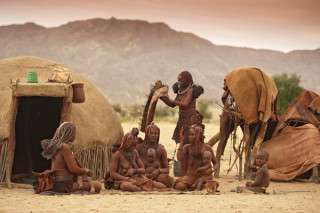 Scenic drives and walks exploring the rocky mountains and golden sand dunes can be combined with fishing in the Kunene River, or cruising to explore the region’s rich birdlife and spot the river’s many crocodiles. The turquoise waters of the swimming pool and shade of the comfortable lounge and library areas offer respite from the desert heart.

The area is the traditional home to the Himba people, one of the last semi-nomadic, desert-dwelling peoples. The Himba village near the camp remains unspoiled by tourism, thanks to the remoteness of the region, and a visit here is a unique opportunity to witness an ancient culture.

Okahirongo’s River Camp can be combined with its sister Elephant Camp in the Purros Conservancy, 200km south of the Kunene River.

The Purros Conservancy lies 55km from the Skeleton Coast and 200km south of the Kunene River in northern Namibia on the Kaokoveld, desert home to the nomadic Himba tribe, desert-adapted elephants and lions.

Here in this remote landscape you will find the 5-star luxury of the Okahirongo Elephant Lodge. Offering 7 indulgent terracotta double chalets and one presidential suite,

Okahiringo is truly an unexpected oasis in an arid wilderness. It takes 2.5 hours in a small plane to reach the camp from Windhoek and much longer to drive in a 4×4 vehicle. But the isolation of the camp has not dinted the level of luxury, which includes King size beds, indoor-outdoor open-air showers and grand bathtubs overlooking the vast plains.   Fine wines and sumptuous Italian/Namibian fusion food are served in the elegant and airy dining rooms. 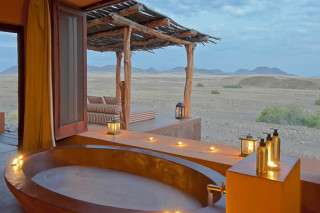 Days can be spent exploring on foot and on game drives through the lushly vegetated riverbeds. Desert adapted elephant can be spotted, plus, antelope and giraffe. Those seeking a rest and an opportunity to drink in the desert landscape can relax in the open-air lounges, or enjoy a sundowner by the infinity pool

Guests are also encouraged to visit the local Himba village. The camp maintains a strong and mutually supportive relationship with the Himba people. The only operator in the area, Okahiringo is involved in a number of local school projects and provides hospitality training.

Okahirongo’s Elephant Camp  can be combined with its sister River Camp on the Kunene River in the northern reaches of Namibia. 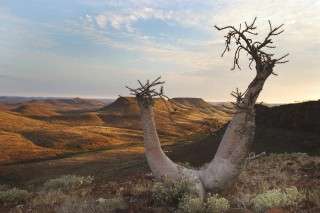 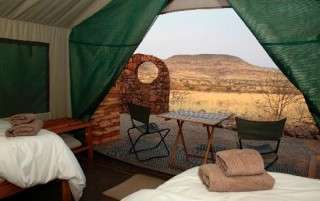 The small, rustic Etendeka Mountain Camp was one of the first “real” safari camps in Namibia, and has been operated by Dennis Liebenberg and his head guide Bonnie for over twenty years. Isolated, and relatively simple by the standards of modern safari camps, Etendeka still has plenty of charm and guests benefit from their hosts’ lifetime of knowledge.

The camp is set in a private concession area in the foothills of the Grootberg Massif. Each of the ten en-suite meru style tents looks out over the ancient lava flows of the northern Damaraland: boulder-strewn, flat-topped mountains and the gold and green of dry grasses and mopane trees.

Although simple the camp is comfortable with flush toilets, hot and cold running water, open-air “bucket” showers and a surprisingly good Wi-Fi connection in the common areas. Simple, but excellent, homemade meals are prepared on solar cooktops or an open fire 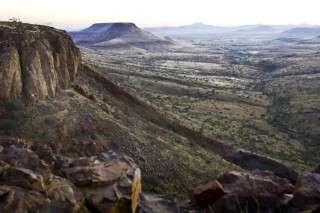 and served under African skies.

Days are spent exploring on foot and in open game drive vehicles with Bonnie and Dennis, both exceptionally knowledgeable guides. The magic formula for this camp is the fact that Dennis and Bonnie have been here from the beginning but still retain their enthusiasm for this land and their guests. 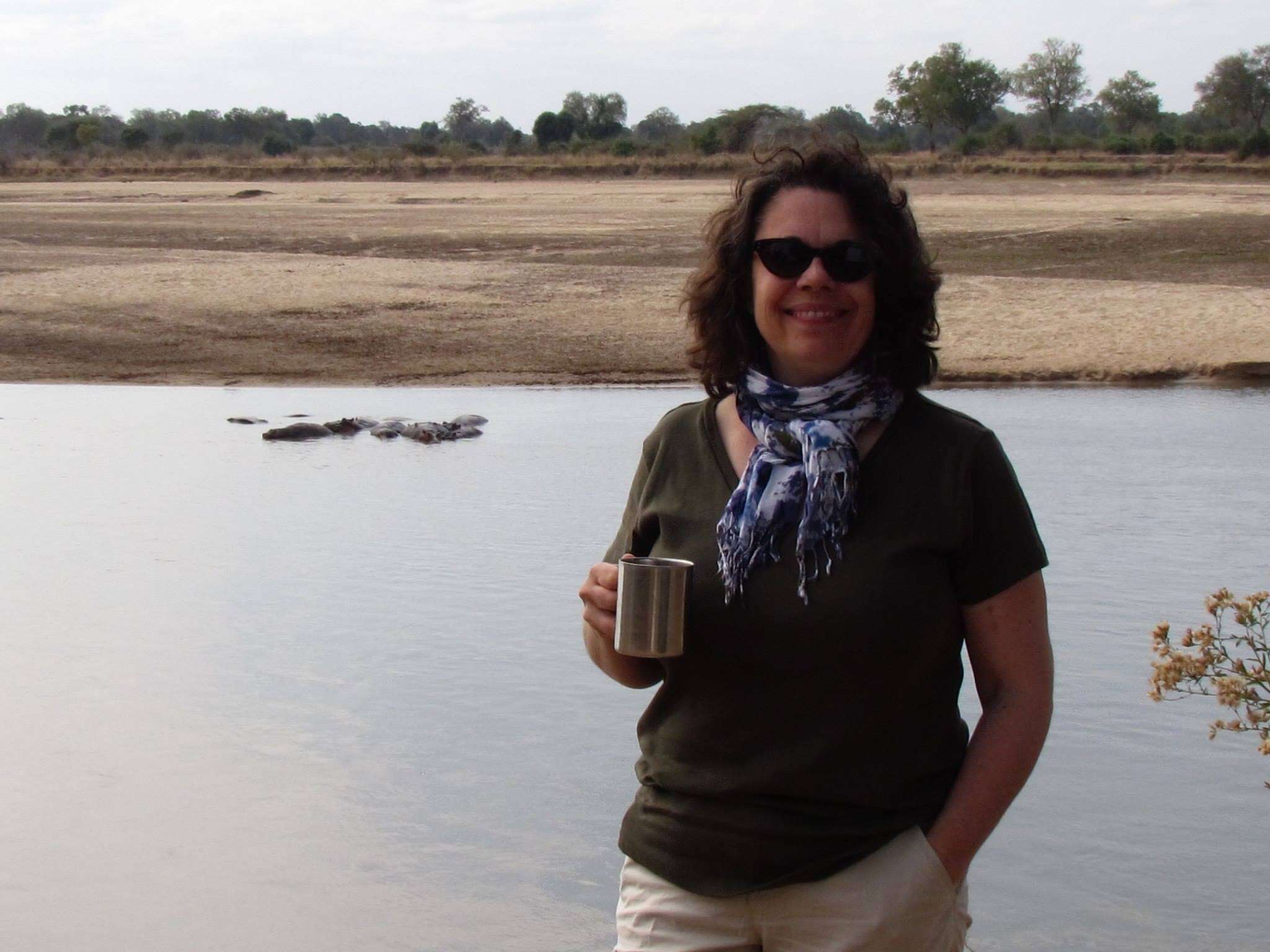 Posted On December 2, 2014  By Stephanie Hunt  And has No Comment 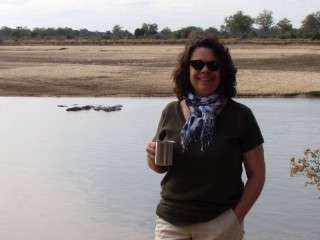 Gisele had done her research before she came to Safari and Co. She knew she wanted to do a wildlife safari in Zambia and a photographic safari in Botswana’s Chobe National Park. Our role was to stitch everything together, because travelling solo in Africa you want to make sure all your i’s are dotted and t’s crossed. We talked to Gisele on her return about the joys of adventuring alone in the wilds of Africa. END_OF_DOCUMENT_TOKEN_TO_BE_REPLACED 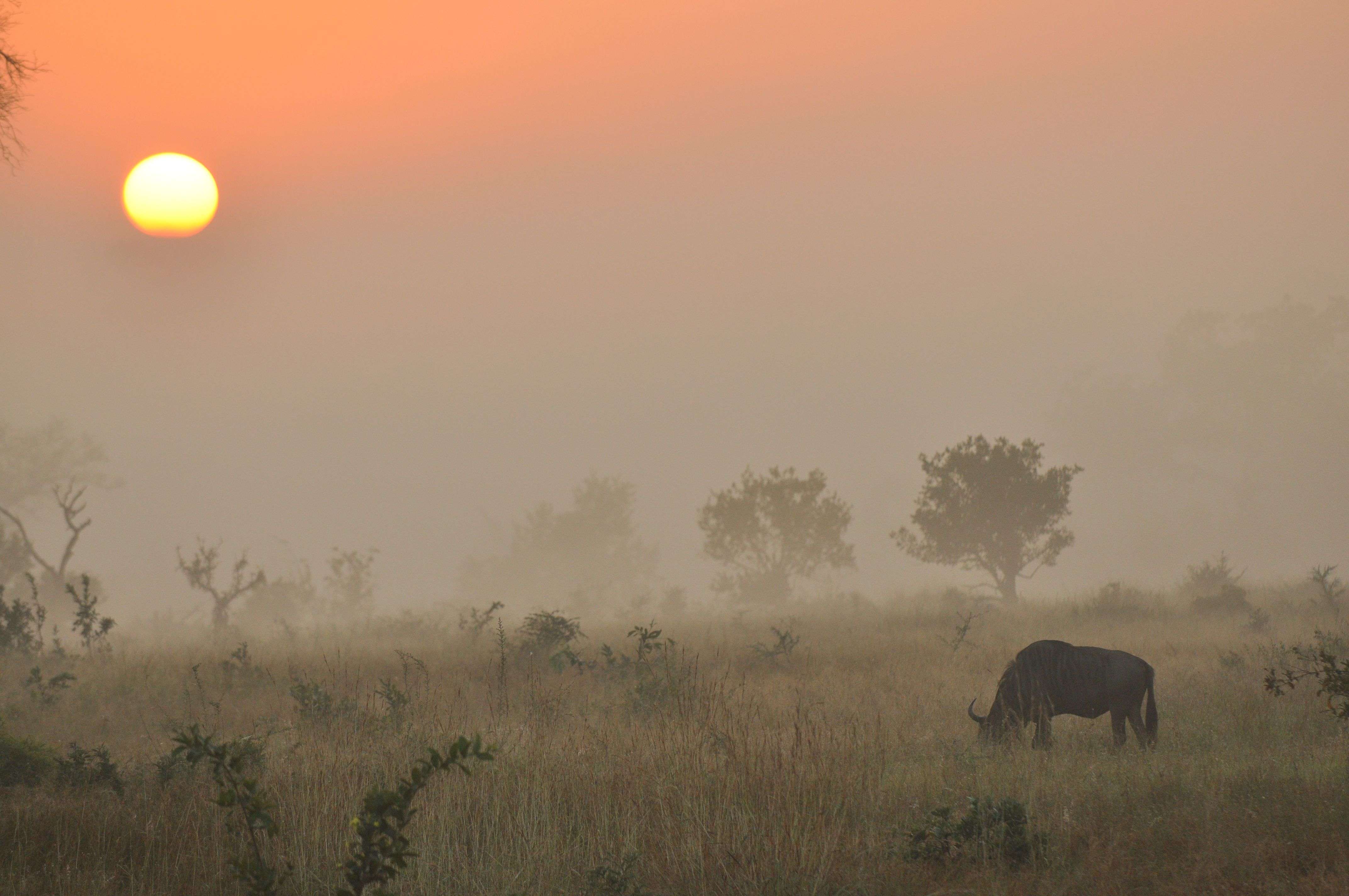 “Once you have the soil of Africa under your fingernails you will be forever drawn back to the continent.” It’s an old saying, but I believe it is true. After 14 years in Canada I still feel the pull of the African bush. I have to go back. I need to reconnect with what I do. I need to establish relationships with the owners of resorts, safari camps and tour operators. But most of all I need to go for my soul.

My latest trip to Africa was short and business focused, but it was still a salve for my African soul.  The primary purpose of the trip was to participate in a travel conference that brought together travel agents and designers with the best operators from throughout Africa.   But I started my one-week trip in the African bush. END_OF_DOCUMENT_TOKEN_TO_BE_REPLACED

Accessible only by light aircraft, the brand new Hoanib Skeleton Coast Camp sits on an island in the dry Khumib riverbed. Straddling the private Palmwag Concession and the Skeleton Coast National Park, the camp is perfectly positioned for exploring this rugged and remote Skeleton Coast.

Eight Meru-style tents make up the living quarters. With sumptuous interior and full ensuite, each tent opens onto a canopied verandah with views straight down to the dunes. The large shared lounge area is filled with comfortable sofas and armchairs and leads into a separate bar and dining area. The large decked terrace has magnificent views, and is ideal for al fresco dining.

Four-wheel drive excursions will explore the roaring sand dunes, windswept plains, canyons and saltpans of this unique landscape. As barren as it looks at first, there is plenty of game just around the corner. This area has one of the greatest concentrations of desert adapted elephant and lion, and home to some elusive and unusual predators like the shaggy brown hyena and the black-toed jackal.

Enjoy a scenic flight over the crumbling shipwrecks and craggy shores of the Skeleton Coast, or take an excursion to see the shipwrecks up close and visit a Cape fur seal colony. 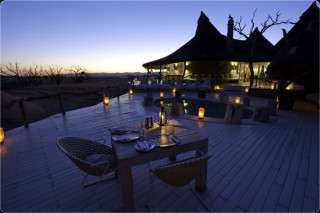 Tucked away on a 37,000 hectare private Kulala Wilderness Reserve, Little Kulala shows off the haunting beauty of the Namib desert. Inspired by its environment, the neutral colours, rich textures and natural light of the camp blend perfectly into the sprawling desert.   You will truly experience the vastness of seemingly endless landscapes and vast starlit skies. 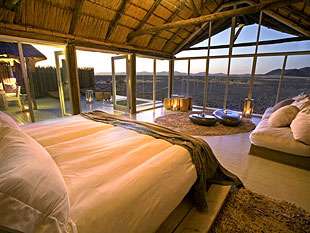 Kulala means “to sleep” and the camp is made up of 11 thatch roofed villas, or kulalas, each with climate control, ensuite with indoor/outdoor shower, a private deck and plunge pool. Each kulala has a rooftop skybed where you can lie back and drink in the African night skies.

The spectacular red dunes of Sossusvlei are what bring people to this area and Little Kulala is the only camp with direct access. Climb Big Daddy with its red sands reaching over 300m above the valley floor. Head out in the early morning and capture the deep reds and rich shadows of the sunrise over Sossusvlei.   Or take a hot air balloon safari, floating across the dramatic dunes and returning for a champagne breakfast. 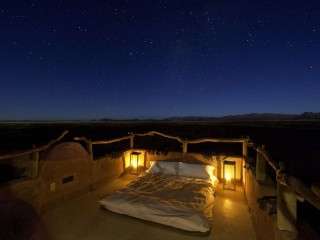 But there is more to explore than the dunes. Take a quad bike tour of the beautiful Kulala Wilderness Reserve. Wander the hills and dunes on one of the guided walking trails. Walk or drive in search of the smaller desert animals like the bat-eared fox, or take a night walk to look for the dancing lady spider.

Then return to camp to shop at the craft boutique, lounge in the library or enjoy a sundowner overlooking the magic desert landscape. Just drink in the serenity. 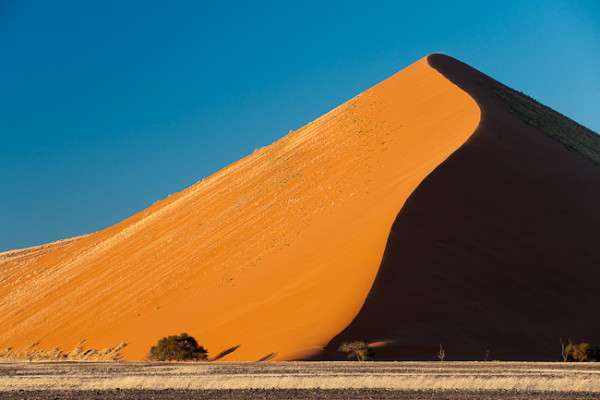 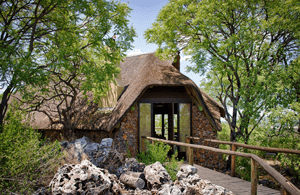 Little Ongava is one of the most exclusive safari lodge in Namibia. Taking a maximum of six guests at any one time, it is all about exclusivity and personalized service.

Each of the three thatched villas is meticulously appointed and includes a private plunge pool, ensuite bathroom, sala and an outdoor shower with views of the waterhole. The entertainment area is ideally set up for relaxation and stylish dining.

Guests share a dedicated guide to ensure an optimal nature experience. As well as the privat 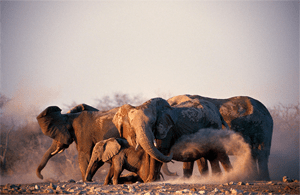 e Ongava Reserve, there is the incredible expanse of Etosha National Park, one of Africa’s largest game parks, to explore. 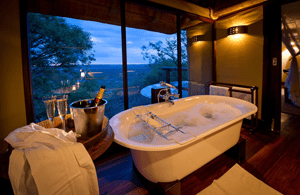 The more adventurous may choose to track the endangered black rhino on foot.

Return to Little Ongava to enjoy champagne in a warm bath as you stare out over the magnificent plains. Enjoy a sundowner looking out over the busy waterhole. Dine on your veranda and drink in the vast African skies. Do as you please – this is your own private piece of Africa.

The Desert Rhino Camp sits amongst the golden plains and rolling, rocky hills of the 450,000 hectare Palmway Concession in Damaraland, between Etosha and the Skeleton Coast.

Partly owned by the Save the Rhino Trust (SRT), this rustic camp is designed to offer guests unique insights into the ecology of this vulnerable area, as well as contributing directly to its conservation.

Namibia’s desert-adapted black rhino is a true desert survivor. Ancient rock art shows rhinos in the region centuries ago, but the late 20th century almost obliterated them. By 1982 less than 10 rhinoceros survived in Kaokoland and an estimated 30 to 40 survived in Damaraland. Thanks in part to the efforts of SRT; northwest Namibia now enjoys the largest truly free-ranging black rhino population left in the world.

The camp is remote and provides a personalised experience.   Holding a maximum of only 12 guests, the setting is minimalist but still full of character and comfort. The eight raised Meru-style canvas tents each have a private verandah where guests can take in the sweeping valley that stretches to the Etendeka Mountains in the background.

The comfortable, tented dining and lounge areas are also elevated. Sit in the large lounge or one of the comfy chairs and read one of the many books on Namibia, or gaze through the partially opened sides of the tent to the panoramic views beyond.

The rhino tracking starts early. Trackers from SRT are in contact with your guide, informing them where to find the rhino. Usually guides will drive to within a kilometer of the rhinos’ location and then approach on foot.

The rhino is not the only game to be found on the Concession. There is a healthy number of desert adapted elephants, a large population of Hartman’s mountain zebra, giraffe, oryx, springbok and kudu. The predator population is Namibia’s largest outside of Etosha, with lions, cheetah, leopard, brown and spotted hyenas.